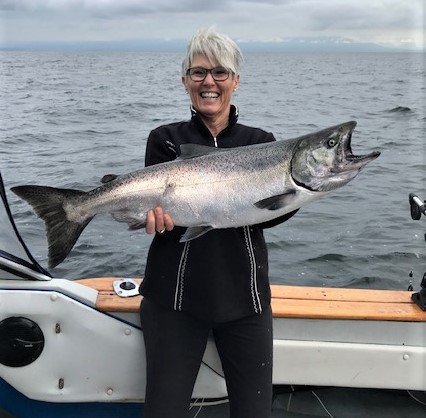 I write this column on Sunday for Wednesday publication. It is amusing to see how much the fishing can change in that time period. The Chinook Salmon enter The Fraser River from May onwards. This is the reason we have the non retention rule in April, May, and June for Chinook, as the early fish generally go furthest up the Fraser to spawn in their home tributaries. Some time between mid August and mid September, the last of the Chinook head towards the rivers, and local fishing slows down. This seemed to be the trend last Sunday, but then the fishing absolutely bloomed over the ensuing week. Almost all of my charters caught their limits, with fish up to nineteen pounds. Yesterday it rained, which triggers a lot of the fish to move. So, I am making no predictions for this weeks fishing. The Nanaimo River fish should be with us for a while yet, so here’s hoping!

I’ve been fishing the outside edge of Entrance Reef, bottom bouncing T-Rex hoochies at 220 feet with great success. Bottom bouncing The Grande with Cookies and Cream spoons produced some fish, also in 180 to 200 feet of water. The jigging has slowed right down, and Clyde is back downrigger fishing, again.

We only encountered one Coho last week. It was a gorgeous 8 pound wild fish, which we gently released. The Pinks seem to be gone already.

Prawning has kind of stalled at 50 to 70 per trap. They are mostly nice sized, but there are some berried females in the mix now, which have to be released.