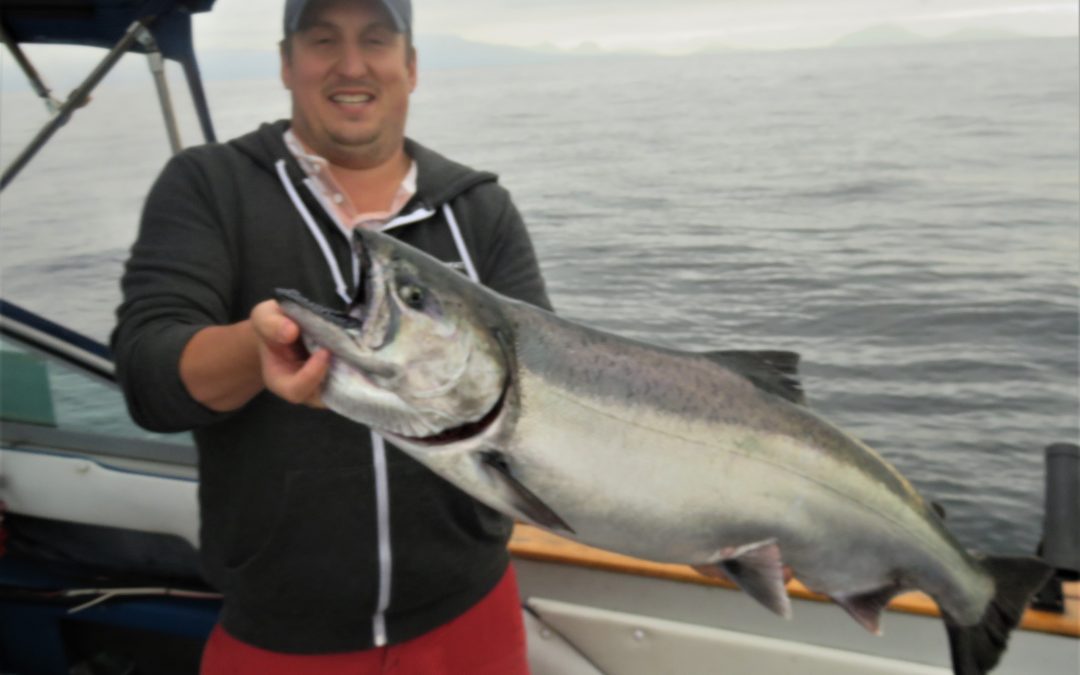 I had a wildlife charter Sunday, but after hearing the great reports from Saturday night, I was chomping at the bit to hit the water on Monday the 12th! When I arrived at the Flat Tops, there was no bait to be found, and few fish on the fishfinder. So, I popped out to Thrasher, only to find the same thing. We accidentally hooked a good Chinook while Ling fishing, only to have a Seal grab it. I chased him around for fifteen minutes, only to have the line break. I heard one of my guests talking on the phone to a friend about the fishing, and he said “we only got a Seal”. This is usually not a good sign! Trollers did better in the next couple of days fishing 150 to 180 feet deep, with Tom Franklin landing a nice low teen Chinook off the Grande at 147 feet on a Skinny G. Barney Rubble and I fished Friday the 16th, and jigged for three hours, with only juvenile Coho to show for it. We ended up with Ling and prawns, and vowed to troll the next trip. So the light tackle party is over, but what a season it’s been for jigging, and shallow water plug pulling! My thanks to Dimitri Tzotzos for giving me the fishing tip of the year! I was in the Credit Union in late July, and he said that he had been jigging off Carlos Island and catching some nice Chinook. We went out the next night and kept 4 beautiful Chinook, and released a couple of other large fish. And, I was hooked. This was the method I learned when we first moved here, taking my 12 foot aluminum boat to Entrance and Orlebar, and jigging. If the Coho move in, we might get some continued action on light tackle, but fishing effort really slows this time of year, so information in that regard is more difficult to ascertain.
Dane said the Chinook have been flooding the Nanaimo River for the past two weeks, despite low water conditions. The Cowichan is showing great returns, also. The Cowichan should be used as a model for D.F.O. as to what stream restoration and enhanced hatchery techniques can achieve. Instead, they prefer to look at it as an aberration. What a shame. The Chinook are homing in on the Fraser in great numbers, also. Dave Korsch had a daily limit of six fish for three people to 31 pounds, the last time I talked to him. Since then, they’ve opened up the commercial fleet, and fishing is “scratch”.
Ling and Rockfish close October 1st, so if whitefish is your thing, act fast!
Prawning has declined a bit, expect 60 to 70 per trap. There is the very occasional female spawner now, which must be released.
Good fishing!