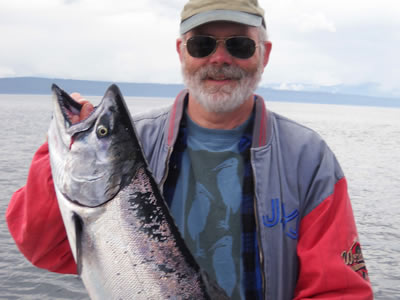 Chinook fishing resorted back to a lack of legal sized fish this past week. Thrasher and the Grande both hold relatively good numbers of fish, but they are all in the “undie” zone at 20 to 23 inches. Fishing the T-Rex hoochie or Killy Magee spoon is still the best bet, at downrigger depths of 140 feet down to the bottom in 220 feet of water. Entrance holds the very occasional keeper, but the volume of fish seems to have moved from there, also. Check your gear very frequently, as the immature Coho are a real nuisance right now. Strange how the Coho numbers are so high as juveniles, yet so low as mature fish during the summer months.
A new UBC study had surprising results. Chinook salmon stocks are four to six times higher in The Salish Sea than in Northern waters as available food in the summer months for our resident Orcas. The assumption has been that our local pods were starving from lack of food supply. Resident Orcas have strangely evolved so that their primary food source consists of almost exclusively Chinook Salmon. Part of the reason for our Chinook non retention in the spring and early summer months has been to enhance their food supply. The study wants to expand it’s data into the spring and winter months. I know, firsthand, that April, May, and June has the highest concentration of Chinook flowing through local waters. So, what is affecting the Orca behaviour, and lack of robust health? Two things are foremost, the increased marine traffic, which fouls their ability to hunt. And, I think, the incredible amount of pollution flowing out of the Fraser River. These are top end predators, and as such, retain huge amounts of toxic waste. So, do you stop all freighter traffic going into Vancouver? Do a massive clean up on The Fraser River? This is a very complex problem, with no easy fix. It saddens me that The Suzuki Foundation has targeted the sports fishery with such vengeance, especially now that it appears to have no scientific basis. I agree with many of their stances, but this is singularly insincere. Why are they not funding stream rehabilitation in the many rivers that need it, instead of spending their funds and using their energy on closing down the sport fishery? First Nations, the NGO’s, and the sport fishermen should be working together to bring the salmon back, not fighting each other over what remains. There is a lot of Federal funding going into salmon restoration this year. Let’s hope, that for a change, it is well spent. And, we should all be involved  in brightening the future for the Chinook and The Orca. I am always constantly thrilled by the incredible majesty of these two creatures.
Good fishing.