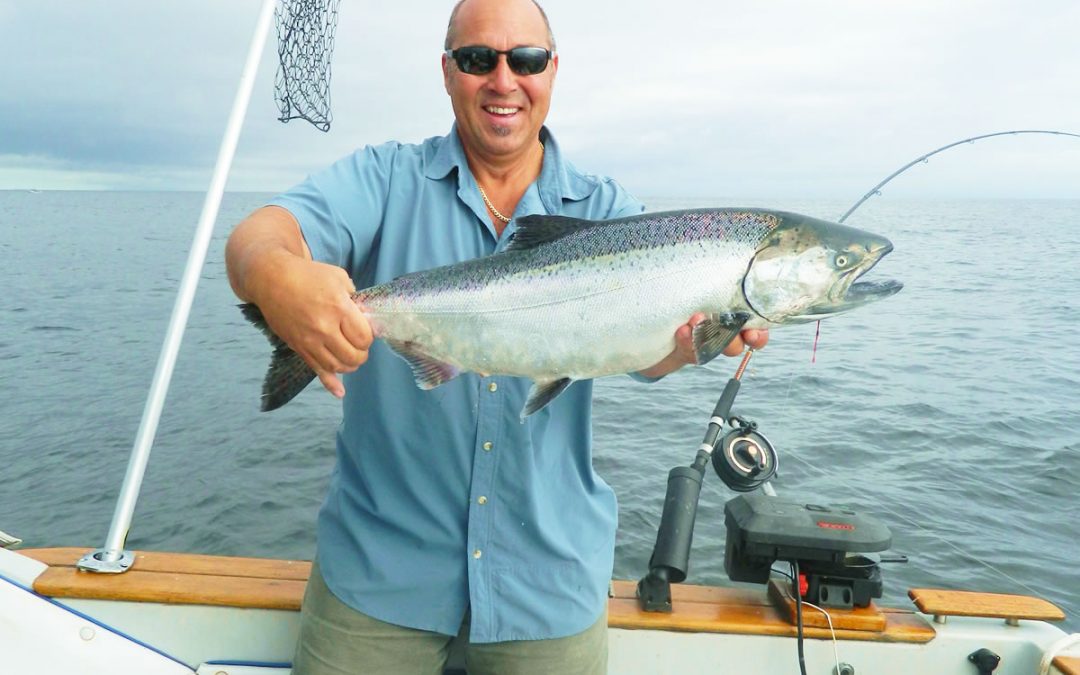 The Chinook are distributed throughout our area. Thrasher, Grande to Whalebone, Orlebar, and the Fingers are all producing Chinook. The fish Highway, in the 600 to 800 foot depths from Thrasher to Entrance is worthwhile also. We encountered smaller Chinook on our last fish through the Grande area, although the fishing was quite active. The Mongoose and Killy MaGee spoons are still favourites on The Silver Blue. Depths range 140 to 220 feet on the downriggers.
Ling fishing proved to be quite frustrating this week, and it wasn’t from a lack of bites. We are really having a tough time keeping the fish on the hooks while using medium herring as bait. We are losing the fish on hard strikes, and halfway to the boat, which makes little sense to me. The Ling have huge mouths, and one would think they would just engulf the bait, and get well hooked. I have tried my normal method of bowing to the fish until they really pull down before setting the hook. We have had really hard takes, where the fish are immediately hooked, then somehow spit the hooks. It is probably just some weird quirk this week, which will normalize, but in the meantime, our catch rate is about twenty five per cent.
I encountered the situation that I had been worried about over the past two weeks, as a commercial prawner dumped their lines over the sport traps, and snagged us. Their boat was only thirty feet from ours, they are traveling at 3 to 4 knots, and when the line became taught between our two boats, I was literally worried they would rip my puller right off it’s base. The tension was too high to unwind the line from my puller, so the line was just burning out of the bucket in reverse, and through the pulleys. They did undo my trap, and toss it in the water, but it had blown my fuse, so I had no power, and Rob retrieved it by hand. Luckily, it didn’t burn up the motor, as has happened in past incidents with them. I just don’t understand their ignorance. They could have set their traps out 20 feet deeper, and just avoided any conflict. But, their message is very clear. This is our water during commercial season. If you dare sport prawn during this time period, we will make it very ugly for you. It is like a dog marking it’s territory. This dog in a junk yard pit bull, though.
Good fishing!