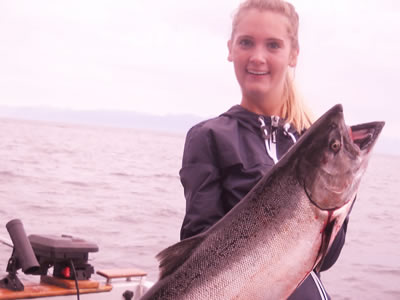 We took a short tour through the 650 foot depth West of Thrasher, and it is still alive with Chinook. We boated and released five Chinook in an hour ranging from undersized to ten pounds. These were taken on Killy MaGee and Mongoose spoons at downrigger depths from 140 to 160 feet. These are such gorgeous creatures, with their purple backs, and turquoise streaks. The majority of these fish were again of hatchery origin, and hopefully B.C. can get it’s dreadful ten per cent hatchery mark rate up to something substantial. Apparently all of The Big Qualicum Chinook will be adipose fin clipped this year, but that is a drop in the bucket compared to the whole. Our American cousins clip one hundred per cent of their Chinook stocks. This is why you can be pretty sure when encountering hatchery Chinook locally this time of year that they are not from our endangered Upper Fraser Tributary stocks.
Ling fishing is productive in the shallows around Thrasher and Entrance. I’ve been using sliding sinkers with medium herring as bait. The Cabezon has been using medium sized silver jigs. Tom’s favourite is swimmer baits, so you can pick your poison for the Ling.
I put down a single prawn trap as a tester on Saturday. We did get fifty jumbo prawns, so last weeks drought is kind of a mystery. I am still very wary of fishing during commercial prawn season. If there are lots of commercial traps in the area you are contemplating fishing, it is probably better to steer clear. They have a nasty habit of dumping their gear down on top of yours. It is no fun trying to bring five hundred pounds of gear to the surface.
Good fishing