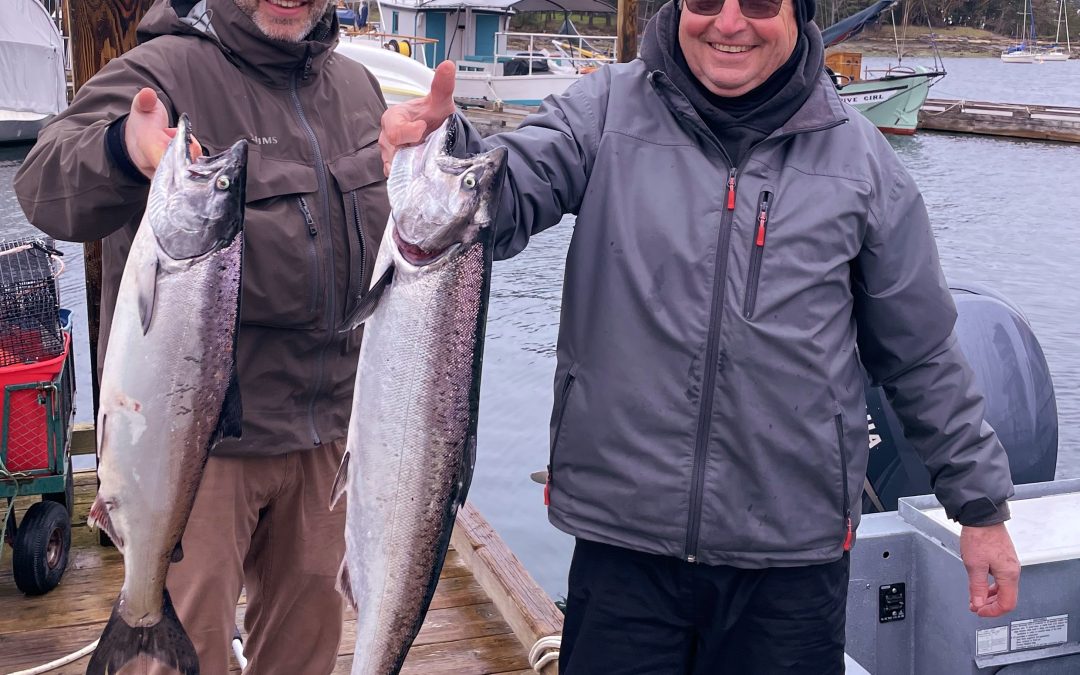 Well, the plankton is upon us, gooping up all the fishing and downrigger lines. This is quite early for a thick bloom, as it usually takes higher water temperatures to trigger this event. The blooms will come and go from now until June in various degrees. April can be the worst month, with a thick blanket of plankton descending quite deep into the water. I run the fishing line between my thumb and forefinger while retrieving, then pluck off the coagulated plankton every twenty feet in an attempt to clean it. It makes a mess of everything, and gets all over the boat and the fishermen. Once the blooms finally clear in June, I take all the line off my reels, thoroughly clean them, then put on all fresh line. The plankton is mildly abrasive, and does eventually cause fissures in the monofilament. A few times, we were reeling in large fish, and it was so thick, it literally plugged the rod tip, and you could not reel. I tried unplugging the tip, but when you’re not applying any pressure to the fish on barbless hooks, they spit the hook. Once, Norm and Shelley and I were fishing, and we hooked up a nice, midteen Chinook, but the tip got plugged. Norm was yelling at me to unplug it, but I just grabbed the line, played the fish between my thumb and forefinger, and told Norm to get the net. There was much commotion between the two of us, and Shell was doubled over the steering wheel laughing. We did land the fish, and I do recommend using this method, if you encounter a plugged rod tip.
It appears that we are going into Chinook non retention on April 1st. There is no scientific evidence behind this decision. We have provided thousands of D.N.A. Chinook samples for Area 17. We intercept the troubled upper Fraser River tributary fish at a rate of approximately 1.5% There are many healthy stocks in Area 17 at this time, which could be harvested. We also have a 40% hatchery fish ratio from April through June. I believe that a one wild or hatchery fish per day limit is totally within reason, and a one hatchery fish per day retention should be an absolute no brainer. But, the rules are the rules, so we won’t be retaining any Chinook after April 1st until probably July 15th again.
The Nanaimo River Hatchery received major funding grants from government and private sources, and is doing a huge renovation of it’s facilities. This looks fantastic for it’s future! They did fall short of their Chinook egg take by about 30,000 eggs. The Fall Chinook run now totals about 4,500 fish, with the Spring/Summer run at about 900 Chinook. Coho eggs were easier to collect, and they had a surplus of about 30,000 eggs. The Nanaimo has never been a huge producer of Coho, with the average annual run estimated at 3,500 fish. There has been a new underwater camera system added for more accurate fish counts, and this will be an incredibly welcome feature.
The main herring spawn was to the North of us again this year, with Hornby Island to Campbell River showing good numbers of this incredibly important forage fish. At this juncture, about 4,500 tons has been taken commercially, with about one third of the quota yet to be fished.
Crabbing is very good off Nanaimo, but I haven’t talked to anyone prawning locally.
Good fishing