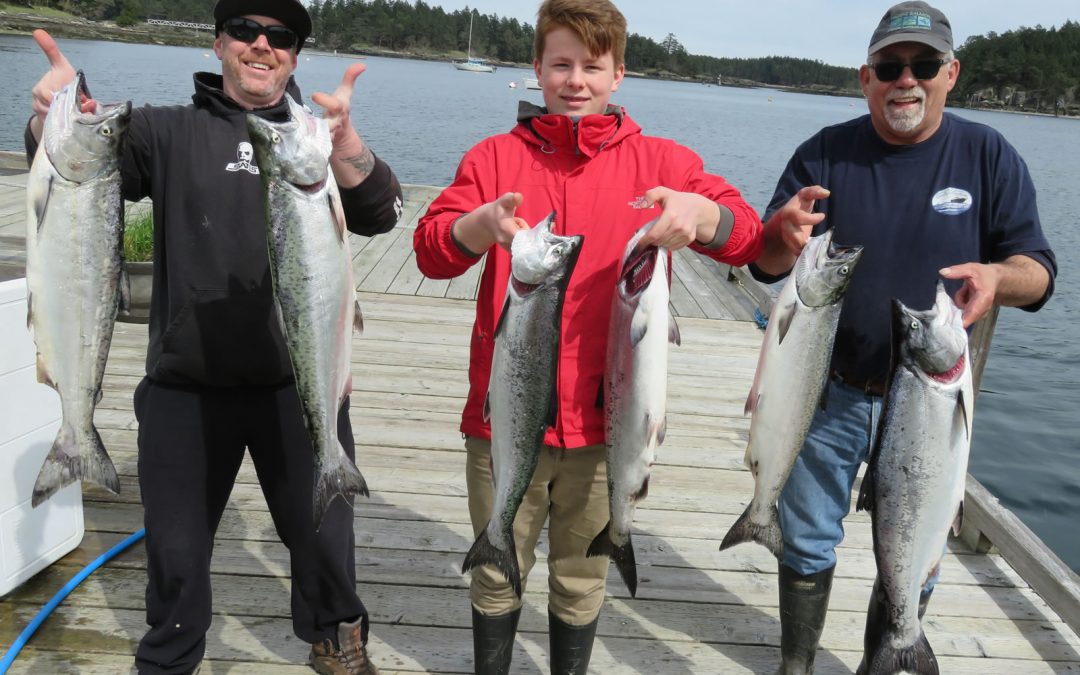 Happy New Year everyone! Shake da Booty!
Derek asked me to do a year end review of 2021. It was a Gong Show. The end.
The winter fishery was generally good in 2021. Thrasher and Entrance held the larger fish, while the Grande held more, but smaller fish. Bottom bouncing in 160 to 220 feet of water (or deeper) is the winter ticket. Spoons of choice included Cookies and Cream, Killy MaGee, and Mongoose. Favourite hoochies were T-Rex or Blue Meany. Rhys Davis teasers in green/chartreuse or clear green scale are Silver Blue standards when fishing bait. These fish are the tastiest of the year, with high oil content, and delicious flavour.
March provided it’s continuing dilemma, as the herring spawn mid month, and there is so much movement it is hard to keep track of the fish. The herring come from offshore into the beach to spawn, then return to deep water. The Chinook follow them, and it can be great one day, vacant the next. D.F.O. again allowed it’s traditional 16,300 ton commercial herring fishery, which was so illogical that it’s astounding.
D.F.O. imposed it’s Chinook non retention rule for April, May and June in 2021, when our fishing is always at it’s peak. There is no scientific evidence behind this decision. D.N.A. samples prove that we intercept the endangered Fraser River upper tributary stocks at a rate of between 1 and 2%. A marked hatchery retention fishery should be allowed. From a chartering perspective, we had the travel ban in effect, plus the Chinook non retention rule. So, no one could come here, and if you were here, you couldn’t retain any Chinook. My charters for this time period dropped 95%. However, when I did fish, it was absolutely amazing. Shelley came off the sea plane one evening, and we popped out by the Grande. We landed and released 10 legal Chinook in about an hour and a half. On one of the few charters I did, we hooked approximately 30 fish, releasing them all unharmed. The unintended consequence of the Chinook non retention is the pressure it puts on our Ling and Rockfish. 80% of the few boats fishing are pursuing these species, when they would normally be Chinook fishing. The ridiculous part of this equation, is that it would make way more sense to retain one of the very abundant migrating Chinook, than to put more pressure on our sedentary bottom fish stocks.
In mid July, the travel ban lifted, and you could retain one Chinook up to 80 cm’s per day. Things got quite busy, and the fishing was generally very good. The Grande to Whalebone area was very consistent, and Entrance was mostly very fine fishing. The Vancouver charter fleet was over daily, fishing like ducks in a row in the Money Hole. I always enjoy yakking with Dave from Predator Charters. He’s a really nice guy, super honest, and that man can really fish! One day I counted 45 boats at Entrance, which is a crowd for Gabriola! Early September was terrific fishing at Entrance, the top end size limit came off, and you could retain two Chinook per trip.
We didn’t’ have the annual Silva Bay Fishing Derby this summer, due to COVID and non retention. This broke the 30 year tradition, and I really can’t predict it’s future.
October was surprising in the quality of fishing off Thrasher. We had some great trips fishing the 160 depth at “The Hook” for 8 to 12 pound feeder Chinook. Vancouver charters were doing quite well during this time period at Entrance, also.
December has had some quality days at Entrance and The Grande, generally bottom bouncing at 160 to 220 feet.
I would guess that we will have non retention again for Chinook April 1st through July 15th in 2022. We do have a new Fisheries Minister from B.C., Chinook stocks were quite good in 2021, and it seems the Orcas have way more to eat here than up North. So, my optimistic guess is 20% that we will have a retention fishery in 2022, 80% nada.
I guess we just role with the times!
Good fishing!