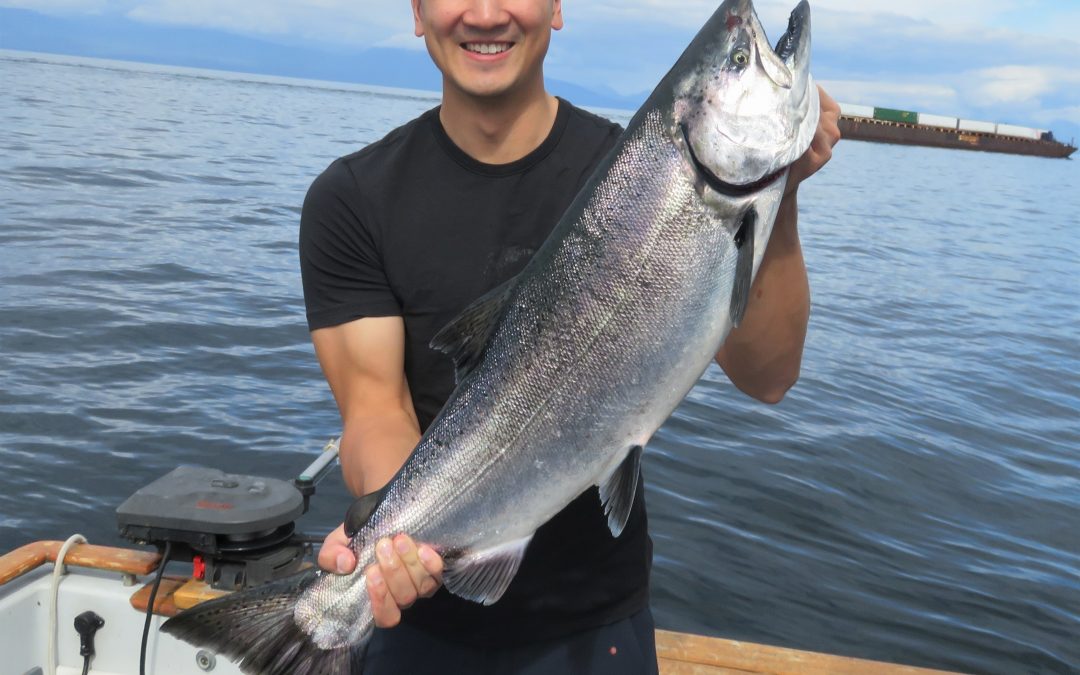 Chinook fishing slowed for two days, as the huge quantities of herring at Thrasher and The Flat Tops disappeared. This makes for very difficult jigging, as you spend so much time cruising around looking at the fish finder for bait schools. On August 18th, the bait returned, and there were huge bait schools cruising the surface at Thrasher and The Flat Tops. The Chinook were just plugged with two inch herring in their stomachs, it was almost amazing that they were still feeding. Entrance and Orlebar are still producing some amazing days for Clyde and Dane. They have been encountering fish in the 20 pound range while jigging, which are gently being released, as they are longer than the top end 80 cm. size limit. Trolling is sometimes productive off the Flat Tops and Thrasher, fishing downrigger depths of 40 to 80 feet.
Jigging proved to be a dangerous sport twice this week. Clyde had a medium sized Chinook about twenty feet from the boat, when it shook it’s head and appeared to literally throw the jig at him. It hit him square in the forehead, and rang his bell. We had a fish fighting on the starboard side of the boat, it spit the hook, the jig flew across the boat, and it hit the fisher on the Port on the back side of the head. He flinched, and his very expensive sunglasses fell off and sank. With all the safety regulations in place in the new modern world, I hope we’re not required to wear bike helmets while jigging!
Ling and Rockfish have been good this week. We are catching the occasional Ling while salmon jigging. They are coming up into the suspended bait schools, and feeding with the Chinook.
Prawning is excellent. There are still no female spawners in the mix.
Good fishing