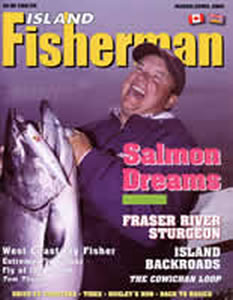 Part of the Gulf Islands, Gabriola Island is easily accessible from Nanaimo by a 20-minute ferry ride. It’s also where Bob Meyer lives. Now Bob has fished the local waters for over 33 years, the last 17 years as a popular guide with a great track record. Thus, when Janice, my wife and fishing partner, and I had an opportunity to fish with Bob last summer, we jumped at the chance.

We agreed to meet Bob at Silva Bay Marina, where Bryan and Joni Jeffery are the new managers. They are surely the best thing that’s happened to the place in 25 years – the new docks and restaurant are a real treat.

Bob’s boat is a 25.5-foot SeaRay Arnberjack with a 10-foot beam, so it was obvious that we were going to have a comfortable outing. After casting off from the dock, Bob prepared the gear as we motored out of the harbour. 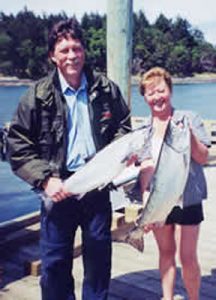 Within another 10 minutes, Hot Spot Flashers trailing green/white Coyote Spoons were down at 45 metres and we were in business. With two rods set, the three of us discussed the fishing opportunities in the waters surrounding Gabriola. Bob told us that it continues year round, with winter chinooks starting in December, and May-June best for larger chinooks – anywhere from 15 -25 pounds – but not a lot of 30 pounders.

Nevertheless, he assured us that it remained rock solid fishing throughout. From July on, chinooks are mixed with sockeye and coho, and mooching with herring becomes the preferred method. He said that working the underwater structure off Thrasher Rock and Entrance Reef usually rewards with a fish or two. Which was where we were rewarded with two very nice chinooks, after which we hustled back to Silva Bay Marina for a well-deserved cold one. It was a memorable trip and we hope to do it again one of these days. 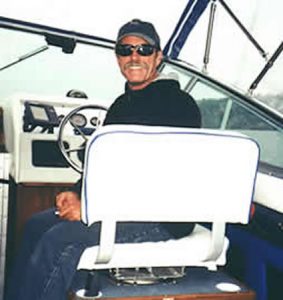 There is lots to do after your fishing trip, for Gabriola offers golfing, diving, swimming beaches, hiking, picturesque bays, marinas, and three waterfront lodges.

For more information on a fishing experience with Silver Blue Charters, contact Bob Meyer at (250) 247-8807.

Reprinted from The Island Fisherman – www.islandfishermanmagazine.com